How to Play Spotify Music on Apple Watch without iPhone

“Can I listen to Spotify on Apple Watch? How to transfer Spotify music to Apple Watch? So that I can listen to these songs without carrying my iPhone when exercising.” 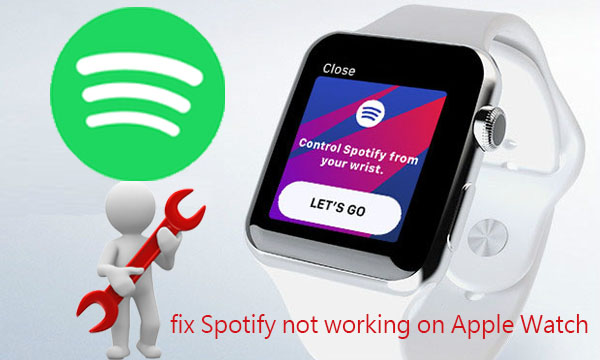 How to Play Apple Music on Apple Watch without iPhone

How to Listen to Audible Audiobooks on Apple Watch

Spotify is supported by Apple Watch. You can play Spotify music on Apple Watch via iPhone. Or you can listen to Spotify music directly from your wrist. The following steps are available for both free and premium Spotify users.

Step 3. In ‘My Watch’ tab > ‘Installed on Apple Watch’, make sure Spotify App is downloaded. 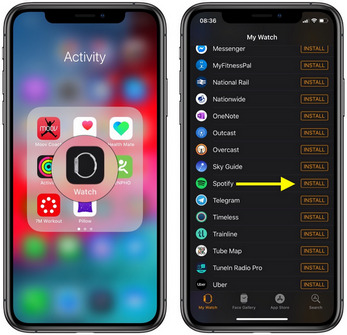 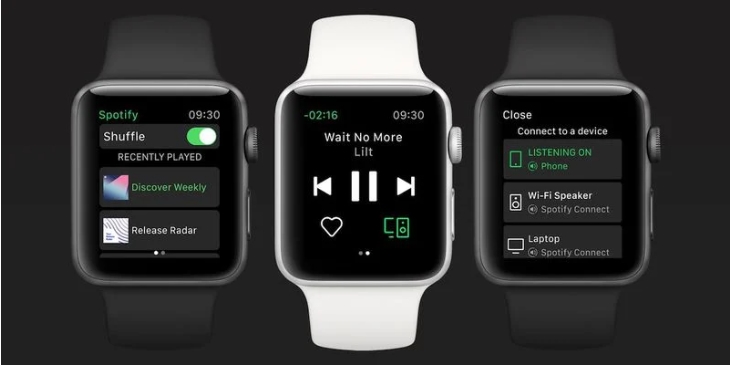 Step 2. Browse the music in the music library from Spotify, and play any song, playlist or album.

Step 1. Power your Apple Watch on, and open the Spotify app.

Step 2. Tap your library and find the music or podcasts you like.

Step 3. Select the songs, playlist, album or podcast and press the three dots (…) and hit “Download to Apple Watch.” 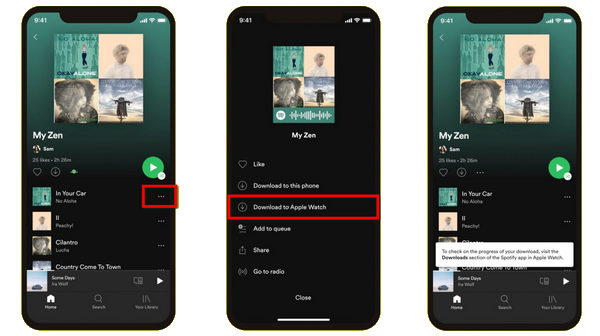 Step 4. Once done, you can listen to Spotify offline on your watch without having your iPhone.

Although you can listen to Spotify on Apple Watch when you are connected to the Internet or your iPhone is nearby. Although the Spotify Premium subscribers can enjoy Spotify music on Apple Watch in offline mode, what about the Spotify free users? What if you cancel the subscription? Due to DRM restriction, you can’t save or transfer the downloaded Spotify tracks on your own device. Don’t worry, you can use a third-party Spotify Music Converter to delete Spotify DRM and convert Spotify music to MP3, M4A or other formats. After that, you can transfer Spotify music to Apple Watch for offline playback without an iPhone.

TunesBank Spotify Music Converter is an all-in-one converter for both Spotify Premium and Free users. It not only can strip the DRM protection from Spotify, but also convert Spotify music to Apple Watch supported formats like M4A, MP3, etc. with 100% original quality. Moreover, it can preserve ID3 tags and metadata info including song name, artist, album, etc. In addition, it supports batch conversion and up to 10X conversion speed, which means you can convert a Spotify playlist in a while. In this way, you can play converted Spotify songs on Apple Watch or other smart watches including Samsung Galaxy Watch, Fitbit Sense, etc.

Guide: Convert Spotify to M4A and Sync to Apple Watch

Step 1. Add Spotify Songs to TunesBank Converter
TunesBank supports you to add songs from Spotify to Converter is so easy. Drag and drop the songs, playlists, albums from Spotify to the main interface of TunesBank. The Spotify files will be added to the converter at the same time.

Step 2. Set M4A as Output Format
After that, hit “Convert all files to:” to set M4A as the output format. M4A format is compatible with Apple Watch.

Step 3. Adjust Output Settings
Tap the “Preferences” in the menu bar then it will pop up a small window, you can adjust channels, Bit rate, Sample rate according to your requirements.

Just a minutes, you will get the converted Spotify songs. 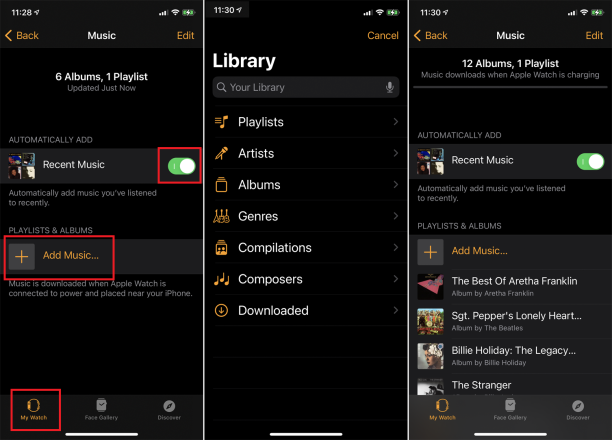 When syncing is done, you can play converted Spotify music on Apple Watch without iPhone even offline.

Q1. Can you Listen to Spotify Offline on Apple Watch?
Answer: Yes. Starting in May 2021, Spotify Premium subscribers can also download their favorite tracks, playlists, albums and even podcasts to Apple Watch for offline listening without having an iPhone! In order to run Spotify offline, Apple Watch must be running watchOS 6 or higher.

Q2. Why is my Spotify playlist not downloading to my Apple Watch?
Answer: Make sure your Watch and the Spotify App are updated. If it still doesn’t work, you can try the Part 2 method – convert Spotify playlist to MP3 by TunesBank Spotify Converter, and then transfer and save the songs to your Watch.

Q3. How to Fix Spotify Not Working on Apple Watch?

Answer: 1# Make sure your Apple Watch is connected to Wi-Fi. You must connect your Watch to the same Wi-Fi network as your iPhone.

2# Double-check you’re using the same Wi-Fi for both Apple Watch and iPhone, then try Spotify again.

3# Disconnect and re-pair the Apple Watch’s Bluetooth and iPhone’s Bluetooth, and the headset is connected.

4# Close the Spotify app on your Apple Watch and then restart it.

5# Update your Apple Watch and the Spotify app to the latest version.

7# Reset the network settings on your iPhone.

8# If it still not working, restart your Apple Watch. But this method will clear out all open apps and any bugs or glitches.

Q4. More Tips about Enjoying Spotify on Apple Watch
1. You can now control playback of Spotify for Apple Watch in your home or on the go.

2. For Spotify Premiums, you can enjoy offline Spotify playback on your Apple Watch, just download Spotify music and podcasts to your watch.

3. You can let Siri follow your commands to play your favorite Spotify songs, artists, albums, playlists, and podcasts on Apple Watch.

In short, if you have a Spotify Premium account, you can enjoy Spotify offline without iPhone. If you are Spotify Free users, or stop subscription from Spotify, you cna rely on TunesBank Spotify Music Converter. As you know, Spotify music are encoded with DRM lock and can’t be transferred to Apple Watch and other non-spotify-approved devices directly for playing. If you want to listen to Spotify music on Apple Watch without an iPhone, you need to get rid of Spotify DRM lock and convert Spotify songs to unprotected M4A files. TunesBank Spotify Music Converter is a must-have tool. With the help of it, you can easily convert Spotify music and playlist to M4A, MP3, etc. so as to import Spotify songs to smart watches for offline playback, such as Apple Watch, Samsung Galaxy Watch, Fitbit Sense and so on. Also, you can transfer the converted Spotify songs to smartphone and any MP3 Player including iOS, Android, iPods, SanDisk, Sony Walkman, etc.