By Cindy MinervaUpdated on December 30, 2022

Vietnamese
Summary
Spotify Music cannot be downloaded on the iPod Nano directly. With TunesBank Apple Music Converter, you can easily convert Spotify Music to M4A or MP3 audio file so that you can play Spotify Music smoothly on any iPod Nano and other iPods.

“I joined the Spotify Music Premium plan recently, and I downloaded the songs from Spotify on Spotify desktop app. When I connect my iPod Nano 7g and try to sync. It shows an error. How can I download Spotify iPod Nano 7g? Please help!!!”

Today, Spotify Music has become one of the most popular music streaming services among many music lovers. Spotify provides 2 option for users, including Free Plan and Premium Plan. With Spotify Premium subscription, you can stream ads-free tracks, albums or playlists and then download them to your device for offline listening. However, it’s a pity that Spotify music is not available on iPod Nano. In other word, you can’t download Spotify music on iPod Nano. Disappointed? Don’t worry? Here you are going to explore how to download Spotify music to iPod Nano.

In fact, Spotify songs are formed in a specific format. Even Spotify premium subscribers, the Spotify tracks they download are in OGG format with DRM protection. However, iPod Nano only supports M4A and MP3 format files. That is to say, the downloaded Spotify music cannot be directly transferred to the iPod Nano like ordinary audio files.

Luckily, you have another alternative way to get Spotify on iPod nano. Generally, iPod Nano can only play locally stored music that is synchronized from a computer hard drive via iTunes. If you want to put Spotify music to iPod Nano, you need to convert Spotify music to M4A and MP3 format, and then import it into iTunes. In this way, you can play Spotify music on iPod Nano smoothly.

TunesBank Spotify Music Converter is an awesome tool for both Spotify Premium and Free users. It not only lets you download songs, album and playlist from Spotify for free, but also supports you to convert Spotify music to DRM-free MP3, M4A, FLAC and WAV audio format at 5X faster speed. In addition, it will preserve 100% lossless quality and all ID3 tags in output M4A and MP3 files, and allows users to edit the ID3 tags as needed.

After which, you can play the converted Spotify music on any device and player like iPod Nano, iPod Shuffle, iPod Classic, iPod Touch, iPhone, iPad, MP3 player, iRiver, Sony Walkman, Android, PSP, Xbox and so on. Even better, you can burn Spotify music to CD on iTunes, or set Spotify song as alarm on your mobile phone.

Guide: How to Download Spotify Music on iPod Nano?

Step 1. Launch TunesBank Spotify Music Converter
Just click the “Download” button above, within a few seconds, the program will be installed on your Mac or PC. When you launch the program on Mac, the Spotify desktop app will open automatically. For Windows users, you should click “Open the Spotify web player” and log in with your Spotify Free/Premium account to get your Spotify library. For Mac users, Spotify app will run with it.

Step 2. Add Spotify Music to TunesBank
TunesBank makes it much easier to pick and download music from Spotify to your iPod Nano. On Windows, you only need to drag the songs/album/playlist to the “+” icon.

Then click “Select All:” button at the bottom of the interface.

Step 3. Set Output Settings for iPod Nano
To play Spotify music on iPod nano or other iPods, you can select output format as M4A or MP3 in the “Convert all files to:” option. By the way, TunesBank allows you to select different format for each song.

Then you can choose the “Preferences” in the menu bar, to customize other parameters as needed, like sample rate, bit rate(up to 320kbps) and channel.

Step 4. Convert Spotify Music to M4A for iPod Nano
Getting all things ready, it’s time to press on the “Convert All” button to convert all the selected Spotify songs for iPod Nano.

After the conversion, please go to “Finished” section to view all converted Spotify music files. When you open it, you will find all the ID3 tags of the Spotify tracks are preserved.

3) Sync Convertd Spotify M4A Songs to iPod Nano. Click on “Music” in the left side, choose “Recently Added”, and tap on “Apply” to sync the M4A songs to the iPod Nano. 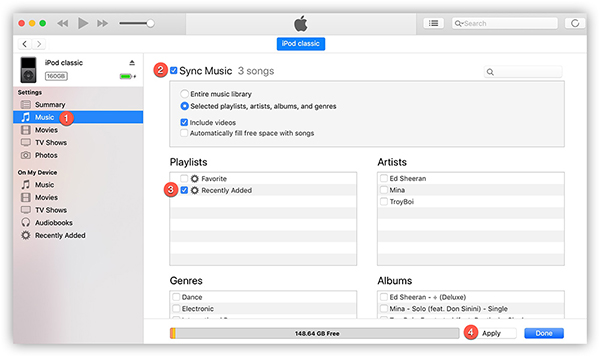 Download Spotify on iPod Nano
Back to >>
Free TrialFree Trial