How to Play Spotify Music on Apple TV

“How do I play Spotify through my Apple TV 3rd? Is there any way to save Spotify music to a USB drive to play them on the TV?” 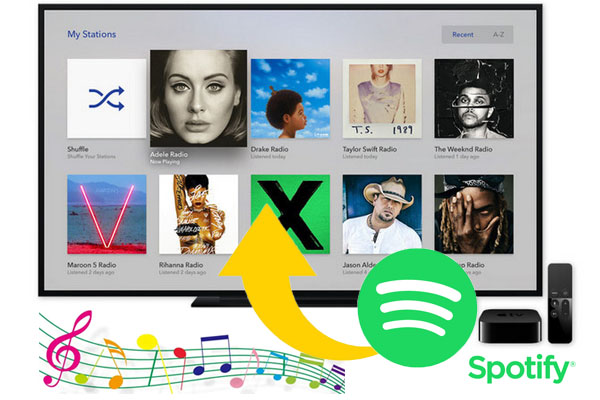 For users of Apple TV HD (4th generation), Apple TV 4K (5th/6th generation), you have a direct way to stream Spotify music to Apple TV. You can go to the built-in App Store to get Spotify on your Apple TV. Please refer to the following steps:

Step 1. Go to the App Store to from Apple Tv’s homepage. Search Spotify and install it. 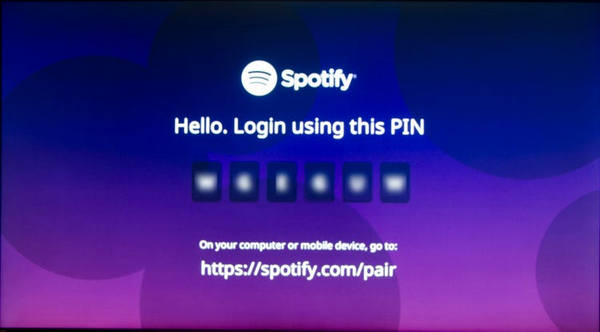 Step 3. Open a browser on your phone or computer, head to spotify.com/pair and log into your Spotify account.

Step 4. After that, enter the pairing code from your Apple TV to connect the device to your Spotify account. 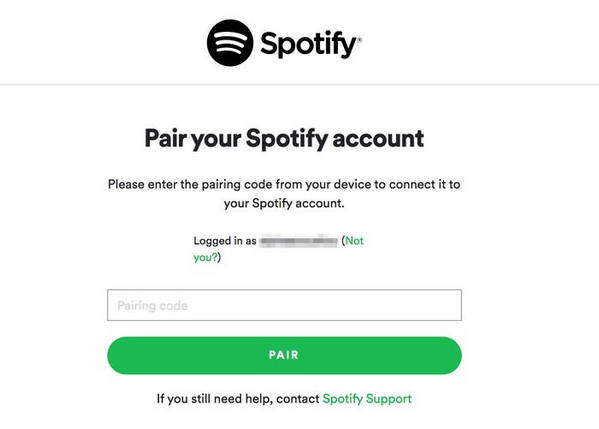 Step 5. After the connection is successful, it will display “Your device has been successfully paired.” Then, you can perform all operations on Spotify for Apple TV just like using the Spotify app on your phone or tablet. Use the remote control to search for your favorite Spotify songs or albums, and you can listen to Spotify music on Apple TV as you like!

Way 1. AirPlay Spotify music to Apple TV 1/2/3 on iPhone/iPad/iPod Touch
Step 1. Make sure you have installed Spotify on your iPhone, iPad or iPod touch. Connect your iOS device and the older Apple TV to the same Wi-Fi network.

Step 2. Open Spotify on your iOS device and start playing any Spotify song on the iOS device.

Step 3. Swipe up from the bottom of the iPhone, iPad screen, and tap the AirPlay icon. Then select your Apple TV. 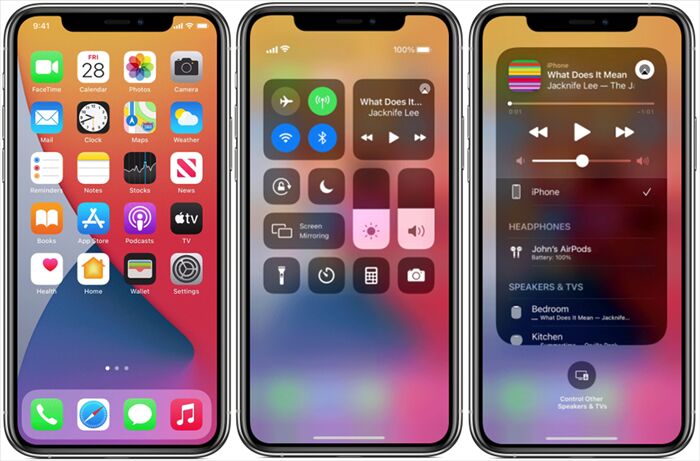 Way 2. AirPlay Spotify music to Apple TV 1/2/3 on Mac
Step 1. Make sure your Mac computer and Apple TV are under the same Wi-Fi network.

Step 3. Open the “System Preferences” app on Mac, and click “Sound” > “Output”. Then choose AirPlay for the output. Now you can listen to Spotify music on your Apple TV.

Tips: If your other devices like Windows PCs, Chromebooks, Android devices, or even Linux computers also support AirPlay, you can try this method.

Well, you can also play Spotify music on the Apple TV through Spotfy Connect function.

Step 1. First of all, download and install the Spotify app on your iPhone or iPad, and login to your Spotify account.

Step 2. Connect your iPhone and Apple TV to the same Wi-Fi network.

Step 3. Play any song on the Spotify app. Next, tap “Device Available” icon at the bottom, and select “More devices”, then select your “Apple TV”. 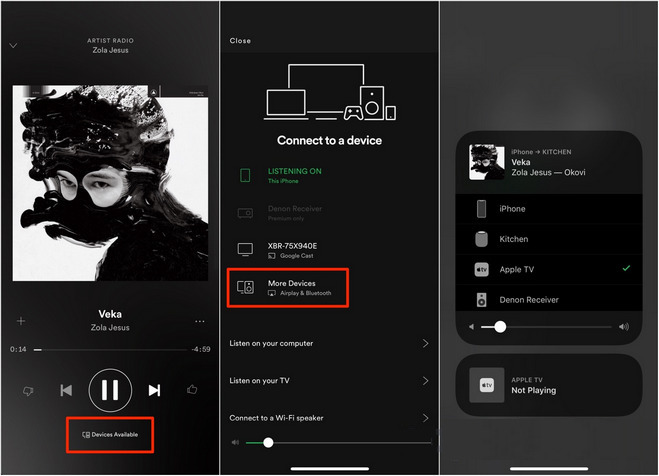 Method 4. Convert Spotify to M4A and Play on All Apple TV (Recommend)

Through the above three methods, you can listen to your favorite Spotify music on Apple TV. But for Spotify Free users, you can’t skip annoying ads and can only stream Spotify on Apple TV online. Although Spotify Premium subscribers can listen to Spotify on Apple TV offline, once the subscription is canceled, this feature will be unavailable. Thankfully, there is another way to play Spotify offline on any Apple TV without the Spotify app and premium. Spotify’s DRM protection restricts your use Spotify songs freely, and you are not allowed to save DRM-locked Spotify songs to Apple TV and other devices. Don’t worry, As long as you can transfer Spotify songs to Apple TV, things will become much easier. Here TunesBank Spotify Music Converter comes in handy.

TunesBank Spotify Music Converter is an all-in-one tool, which not only can help you remove DRM from Spotify, but also convert Spotify music to M4A, MP3, WAV and FLAC format at 5X faster speed. Apart from this, it will preserve the original quality, ID3 tags and metadata of Spotify songs. In this way, you can transfer the converted Spotify songs to USB drive to play in the Apple TV, or import them to iTunes and use Home Sharing to access the songs in the iTunes library on Apple TV. Also, you can transfer the converted Spotify songs to any device and player for offline playback, such as iPod Nano/Shuffle/Classic/Touch, iPhone, iPad, MP3 player, Android, Amazon tablet, Samsung, Sony Walkman, PS4, Zune, PSP, Windows Media Player, QuickTime, etc.

Tutorial: Convert Spotify to M4A and Play on Apple TV

Tutorial 1. 1 How to Convert Spotify to M4A with TunesBank

The following content will be divided into 2 parts. First, you will learn how to convert Spotify music to M4A files with TunesBank Spotify Music Converter for Windows. For Mac users, you can refer to this article How to Download Spotify Music to MP3 on Mac. After which, you could transfer or cast the converted Spotify songs to Apple TV for offline playback. Let’s go!

Step 2. Add Spotify Songs to TunesBank
Then you will see you Spotify music library, you just need to drag any song, album or playlist to the “+” icon.

Click the checkbox in front of the song or click the “Select All:” button at the bottom.

Step 3. Adjust Output Settings
Once added the music successfully, you can adjust the output settings as you like. To transfer Spotify music to Apple TV, please select M4A or MP3 format in the “Convert all files to:” option.

Then choose “Preferences” in the menu bar, in the pop-up window, you can adjust the Bitrate, Sample Rate, Channels, etc.

After conversion, you can click “Finished” > “View Output File” to find the converted Spotify M4A files.

#1 Play Spotify Music on Any Apple TV via USB Drive
Transfer the converted Spotify M4A files to a USB drive, then plug the USB drive to the Apple TV for playback. 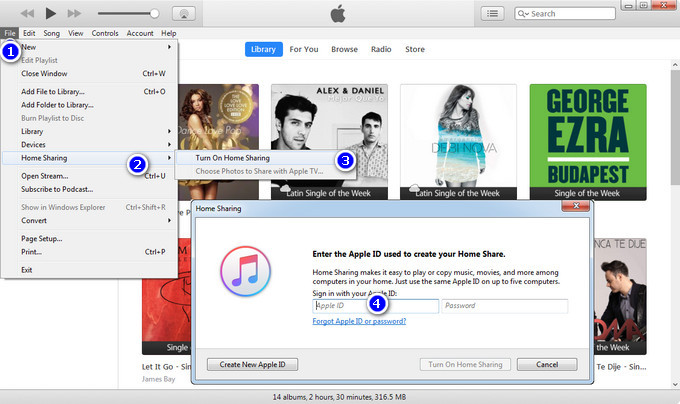 Open Apple TV, go to “Settings” > “Accounts”, turn on the “Home Sharing”. After that, you can start playing music from iTunes on Apple TV. 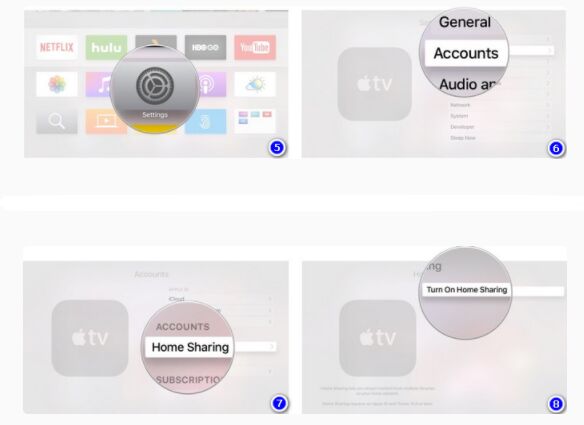 #4 Play Spotify Music on Apple TV via Chromecast
If your Apple TV supports HDMI port, you can use a HDMI cable to connect your computer with the Apple TV. Then you can play the Spotify music on the computer and cast to the Apple TV.

Here you have got the detailed methods to play Spotify music on different models of Apple TV, including Spotify app, AirPlay, Spotify Connect, USB drive, Home Sharing, Chromecast, etc. In my opinion, the best way is to use TunesBank Spotify Music Converter to convert Spotify music to M4A format, and then transfer it to Apple TV. So you can play Spotify music offline on any Apple TV. Besides, you can also transfer the converted Spotify songs to any device and tablets for offline playback. In a word, TunesBank Spotify Music Converter is worth trying!