How to Sync Spotify Playlist to MusicBee

By Cindy MinervaUpdated on February 02, 2023

Many Spotify users have met such issue when they tried to sync Spotify playlist to MusicBee. MusicBee is not only a freeware media player, but also an excellent music manager. But Spotify is a subscription-based streaming service, all downloaded Spotify songs are cache files with DRM protection. If you are a Spotify user and want to transfer Spotify playlist to MusicBee for playback or library management, you’d better put an eye on this article. In this article, we are going to teach you an easy way to sync Spotify music to MusicBee. After which, you’ll be able to manage your Spotify music library on MusicBee, and play Spotify playlists on MusicBee on your Windows computer without internet connection!

Many Spotify and MusicBee users wonder why they failed to import playlists from Spotify to MusicBee. Although Spotify allows Premium subscribers to download songs, albums & playlists from Spotify for offline playback, they don’t actually own the downloaded music files. Because Spotify uses DRM to protect its music, and all Spotify songs are encoded in Ogg Vorbis format. As a result, All Spotify users (Free & Premium) can only listen to Spotify music within Spotify app, they are not allowed to transfer/sync Spotify songs to other music player/apps/platforms.

But never say die. You may know that MusicBee supports to play the songs in unprotected audio formats, including MP3, AAC, M4A, FLAC, WAV, MPC, OGG, ALAC, WMA, etc. In other words, if you could crack Spotify DRM and convert Spotify playlist to MusicBee compatible formats like MP3, M4A, FLAC, etc., then you can easily add Spotify playlists to MusicBee! Lucky for you, there are many helpful Spotify Music Converters on the market, here we highly recommend TunesBank Spotify Music Converter.

Step 2. Add Spotify Playlists to TunesBank
Next, it will lead you to your music library. Directly drag the “Playlist” or any songs to the “+” icon.

Then TunesBank will immediately import all the songs in the playlist. Just tap “Select All” at the bottom.

Step 3. Select MP3 Format for MusicBee
TunesBank Spotify Music Converter offers MP3, M4A, FLAC and WAV formats, all of them are supported by MusicBee. You can pick the target format in the “Convert all files to:” option. If you don’t have any idea, MP3 is recommended.

Step 4. Start Converting Spotify Playlist for MusicBee
Simply press on “Convert All” button, and TunesBank will begin to convert your Spotify playlists to MP3 audios while removing the ads and DRM. 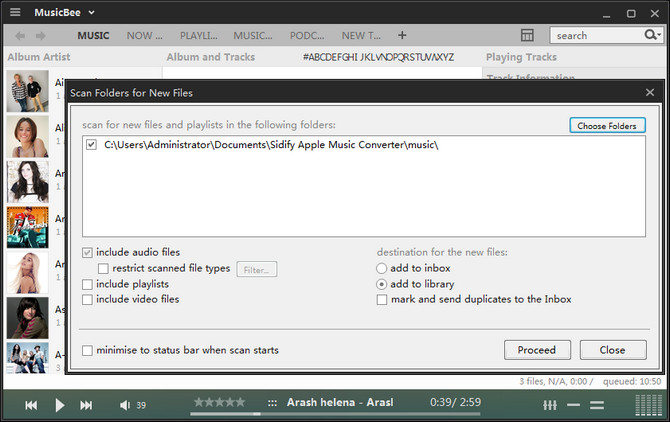 Great! You can now play Spotify music on MusicBee anytime without network. Moreover, you may manage your music library on MusicBee according to your needs!

Sync Spotify Playlist to MusicBee
Back to >>
Free TrialFree Trial