How to Listen to Apple Music Offline

How to Listen to Spotify Offline without Premium?

How to Listen to Audible Books on Any Devices Offline?

Check out this post, here we are going to show you the full guide on how to listen to Apple Music tracks offline on iOS, Android, Mac, and Windows with/without Apple Music subscription. Even better, you’ll have chance to enjoy Apple Music offline on any device without limits!

If you join the Apple Music subscription, then you will be able to enjoy Apple Music tracks without an internet connection. If you are new to Apple Music (never use Apple Music before), then you can get Apple Music free for 3 months. Apple Music allows you to save songs, albums, artists and playlists to mobile devices or computer for offline listening. Before you can download Apple Music to listen to offline, you need to add the content you like to your media library.

Step 1. Launch the Apple Music app on your iPhone, iPad, iPod Touch, Android phone or tablet, and sign in with your Apple Music account.

Step 2. Find the song, album or artist that you want to download. Then tap the cloud icon next to the song or album to download it.

Step 3. When finished, you can tap “Library” > “Downloaded” to find the downloaded Apple Music songs or albums. 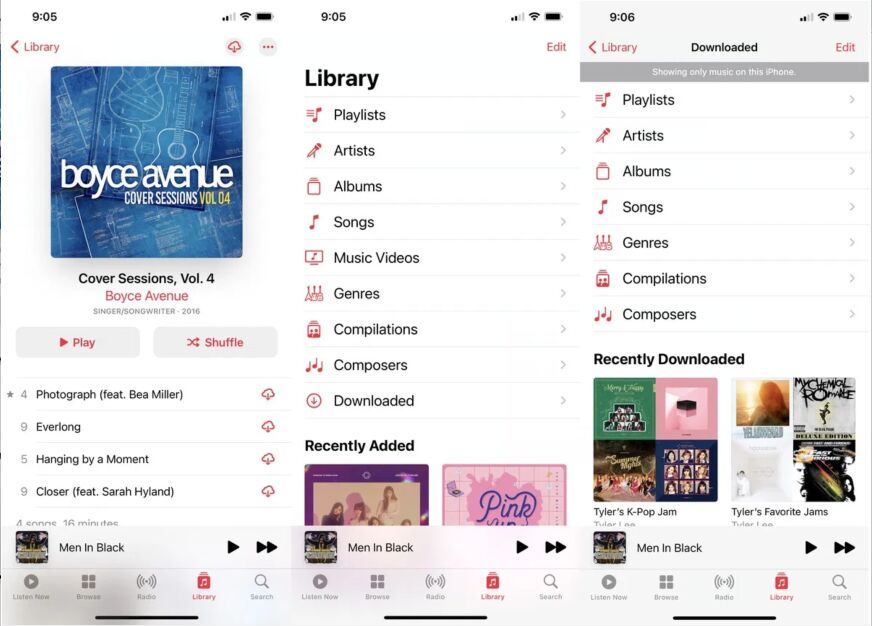 Step 1. Launch iTunes on your PC or Mac. For MacOS 10.15 Catalina or above, please open the Apple Music app.

Step 2. Find the “Songs”, “Artist”, “Album” or “Playlist” that you want to download in the left side, and then click it. Also, you can use the Search Box to quickly locate the song.

Step 3. Tap the cloud icon under the song or album to download it.

Step 4. After downloading the songs or albums, you can tap on “Downloaded” in the left side to view the downloaded contents.

Now you can listen to Apple Music in offline mode on your mobile devices or desktop during the subscription.

Can you Listen to Apple Music Offline for free?

In order to listen to Apple Music offline on any device without limits, you need to use a third-party tool to remove Apple Music DRM and convert Apple Music M4P songs to MP3 or M4A popular formats. Here we highly recommend TunesBank Apple Music Converter.

TunesBank Apple Music Converter is well designed to help you get rid of Apple Music DRM lock and convert Apple Music to MP3 format and make them playable offline on any devices. Specifically, it is able to convert Apple Music tracks, iTunes music, iTunes audiobooks and Audible Audiobooks to MP3, M4A, FLAC formats at 5-10X faster speed. By adopting a top-leading DRM decrypting method, it will preserve original audio quality, ID3 tags and metadata in output MP3/M4A files. After conversion, you can freely transfer the unprotected Apple Music songs to any device to listen to offline, such as MP3 players, iPod Nano, Shuffle, iOS, Android, PSP, Xbox, car player, etc.

Guide: Convert Apple Music to MP3 for Offline Listening on Any Device

Step 2. Add Apple Music Songs to TunesBank
As you can see, you’ve entered the Apple Music Web Player. Just open any songs or playlist in the left panel, and drag/click it to the “+” icon.

Then select the desired songs or the whole playlist by ticking the checkbox. Batch conversion allows you to choose as many as songs you like.

Step 3. Select MP3 as Output Format
After the successful adding, please go to the bottom of the interface. Here you can customize the output settings like output format, output quality, output path, etc. To listen to Apple Music songs offline on any device, MP3 format is recommended. M4A format is compatible with any Apple devices, you can also choose M4A format. To change the metadata, you can go to “Metadata” option.

Step 4. Convert Apple Music to MP3 Format
If ready, hit on “Convert” button to start converting Apple Music tracks from M4A format to unprotected MP3 format. During the process, TunesBank allows you to turn back to the “Library” to add more tracks.

After the conversion is complete, you can go to “Finished” section to find the converted Apple Music songs.

Now, you can use transfer these converted Apple Music MP3 songs to your MP3 player, iPod device, smartphone or any other devices for offline listening and keep them playable without subscription!

Listen to Apple Music Offline
Back to >>
Free TrialFree Trial