How to Play Apple Music on Amazon Echo?

Amazon Echo is developed by Amazon, which is both a smart portable device and a small speaker. You can connect Echo to the voice-controlled smart personal assistant service Alexa, and then you can wake it up by saying “Alexa” to report weather or traffic information, play music, set alarms, listen to audiobooks, etc. With Amazon Echo, you can also easily control compatible smart home devices, kitchen timers and so on. In addition, Amazon Echo supports playing music on most streaming music services through Alexa, including Amazon Music, Pandora, Spotify, etc. Here the question came, if you subscribe to Apple Music, can you listen to Apple Music on Amazon Echo? Of course yes! Now, follow this post to explore how to enjoy Apple Music on Amazon Echo, Amazon Alexa devices.

Since Apple Music is not a build-in app on Amazon Echo, so you are not allowed to play Apple Music through the voice-controlled assistant Alexa directly. To listen to Apple music on Amazon Echo, you can connect your iPhone or Android phone to Amazon Echo via Bluetooth. Here we will take the iPhone as an example.

Step 3: Finally, load up your Apple Music app on iPhone, and play any song. Then the songs from Apple Music will be able to play on Amazon Echo.

TunesBank Apple Music Converter is a must-have tool to remove DRM from Apple Music and convert any songs from Apple Music’s library. It not only can convert Apple Music songs to common MP3, M4A, FLAC or other Echo compatible formats at 5-10X speed, but also supports to preserve 100% original audio quality, all ID3 tags and metadata after conversion.

Step 2: Add Apple Music Files to TunesBank
Choose “Music” or “Playlist” on the left side, and drag it to the red “+” icon to import them into the converting list.

And then click on the checkbox to select the desired Apple Music songs, or just click the “Select All:” at the bottom to select the entire playlist.

Step 3: Set MP3 as Output Format for Amazon Echo
Click on Menu bar > “Preference”, in the pop-up window, select “MP3” as output format. By the way, you can adjust the Output File, Bitrate, SampleRate, Channels according to your preference.

Once the conversion finished, you can click “Finished” > “View Output File” to view the converted Apple Music songs.

2: Drag the converted Apple Music files and drop them into the Upload option in the right side under Actions.

3: Tap on “My Music” > “Song” > “Offline” in the interface on right side. And then click the upload icon to select the songs to upload. And click “Upload” to start streaming Apple Music to Amazon Music app. 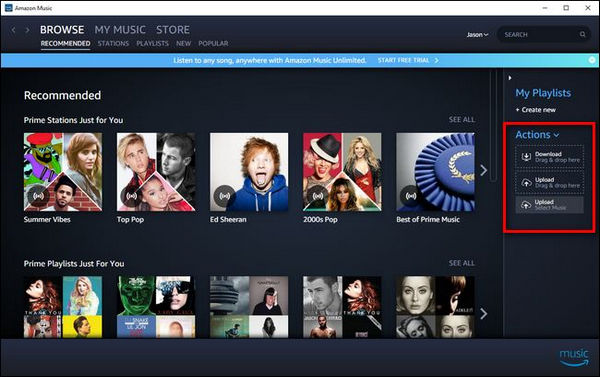 Now you can listen to Apple Music on Amazon Echo through Alexa.