How to Transfer Apple Music to SD Card

Step 1. Open the Apple Music app on your Android phone, and then select the menu icon > Settings.

Step 2. Select the “Download Location” option, then a small window will pop up, select “Yes”, and then select the SD card you want to save from the list.

Step 3. When asked if you want to move all currently downloaded music and all future music to the SD card, accept the prompt. 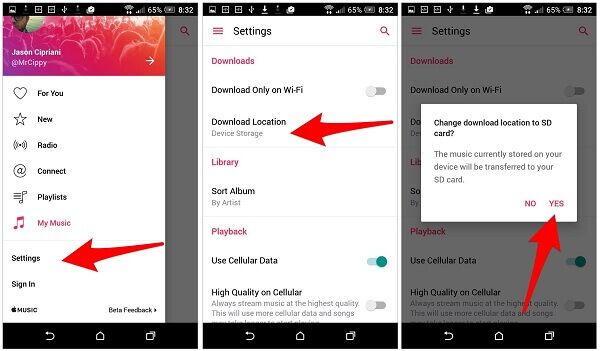 For iPhone users, they can’t directly move Apple Music to an SD card for the reason that iOS device do not have a built-in SD card. Luckily, with using a third-party tool, you can not only copy Apple Music to external SD card, but also insert the SD card into the car player and some MP3 players with micro SD cards for playback! Here you meet TunesBank Apple Music Converter.

TunesBank Apple Music Converter is specially designed to unlock Apple Music DRM restriction and convert Apple Music tracks to MP3, M4A, AAC, FLAC formats which can be stored in SD Card. It supports converting Apple music tracks at 5X speed on Mac computer and 10X speed on Windows, which other converters cannot do. What’s more, the output quality is good enough, the bitrate can up to 320kbps, and all the ID3 tags, metadata will be well kept in output MP3/M4A files. After which, you can transfer the converted Apple Music files from hard drive to SD card, USB drive, PSP, MP3 player, Android, etc.

Below are the detailed steps about converting Apple Music to MP3 and transferring to SD card. Please make sure that you have installed the iTunes application on your computer.

Step 2. Select Apple Music Songs
Click on the “Music” or “Playlist” in the left panel, and the tracks will be shown in the right panel.

You can select the tracks or even the whole playlist you want to save to SD card.

Step 3. Choose MP3 as Output Format
Go to the bottom of the interface to customize output settings. To convert Apple Music tracks for SD card, MP3 format is recommended. Here you can also adjust the bit rate, sample rate, output quality, channel, etc for your preference.

Step 4. Start to Convert Apple Music for SD Card
If everything is ready, please hit on the “Convert” button to save Apple Music songs to computer with keeping original quality.

After the conversion, you can go to “Finished” section to get the converted Apple Music files. you can click “View Output File” to locate the output files.

With the help of TunesBank Apple Music Converter, it’s really easy to transfer Apple Music to SD card and USB flash drive, isn’t it? Now that your phone has released a lot of memory, you can also insert the SD card to your car player for enjoying!