“Recently, I joined the Spotify Premium plan, can I play Spotify music on the Xbox One in the background? Thanks.”

Many video games have excellent soundtracks, but sometimes you want to listen to your favorite Spotify music in the background while playing games on Xbox. Can you play Spotify music on Xbox? Fortunately, the Spotify app is available for Xbox One, PS3, PS4 and consoles. What about Xbox 360 users? Don’t worry, here we will show you 2 effective ways on how to play Spotify Music on Xbox One/Xbox 360 as background music while playing games without interruptions.

Way 1. Play Spotify Music on Xbox One via Spotify App

If your are using an Xbox One, it’s quite easy to play Spotify music on Xbox One. Now Spotify app works perfectly on Xbox one, it will be a great experience to enjoy Spotify songs on Xbox One while gaming. You can refer to the following simple steps.

Step 1. Run your Xbox One, and go to the Xbox store to download Spotify Music app.

Step 2. After downloading, launch Spotify app on Xbox One.

Now you can stream Spotify on Xbox One while gaming. Or listen to Spotify music offline on Xbox One with a Spotify Premium account.

Is playing Spotify songs on Xbox One always affected by bad networks? Or want to cancel Spotify subscription but keep the downloaded Spotify songs playable on Xbox one? Still worrying about playing Spotify music on Xbox 360? To break all these restriction, you can use a third-party tool to save Spotify music or playlists as local files, then copy them to a USB drive for playback on Xbox One. Here we bring TunesBank Spotify Music Converter.

TunesBank Spotify Music Converter is an awesome tool for Spotify free and premium users to play Spotify music and playlist on Xbox One, Xbox 360 with ease. This wonderful tool can aims to convert Spotify tracks, albums and playlist to common MP3, M4A, FLAC, WAV formats to be playable on Xbox One, Xbox 360, PSP, PS4, PS3, Zune, MP3 players, etc. Meanwhile, it will preserve 100% original audio quality and all ID3 tags in the output MP3/M4A files. After conversion, all the Spotify songs will be well kept on your hard drive forever, and then you can copy them to a USB flash drive for offline playback on all Xbox series.

Guide: Convert Spotify Music to MP3 for Playback on Xbox

Step 2. Add Spotify Tracks or Playlist to TunesBank
To add the songs from Spotify to the program, you can copy and paste the song/playlist link to the bar of the program, and click “Add File”.

Or drag and drop the playlist or album link to the interface of the program. Then it will analyze the song link and load the songs automatically.

Step 3. Select MP3 as Output Format
To play Spotify on Xbox one/ Xbox 360, MP3 format is recommended. You can select MP3 as the output format in the upper right corner, or pick different format like M4A, FLAC, WAV for each song in the “Output Format:” option.

Step 4. Customize Output Settings
Click “Preferences” menu in the upper right corner, it will pop up a new window. Here you can adjust the output path, BitRate, SampleRate, etc. for your preference.

After the conversion is complete, you can go to “Finished” section to find the converted Spotify music files. 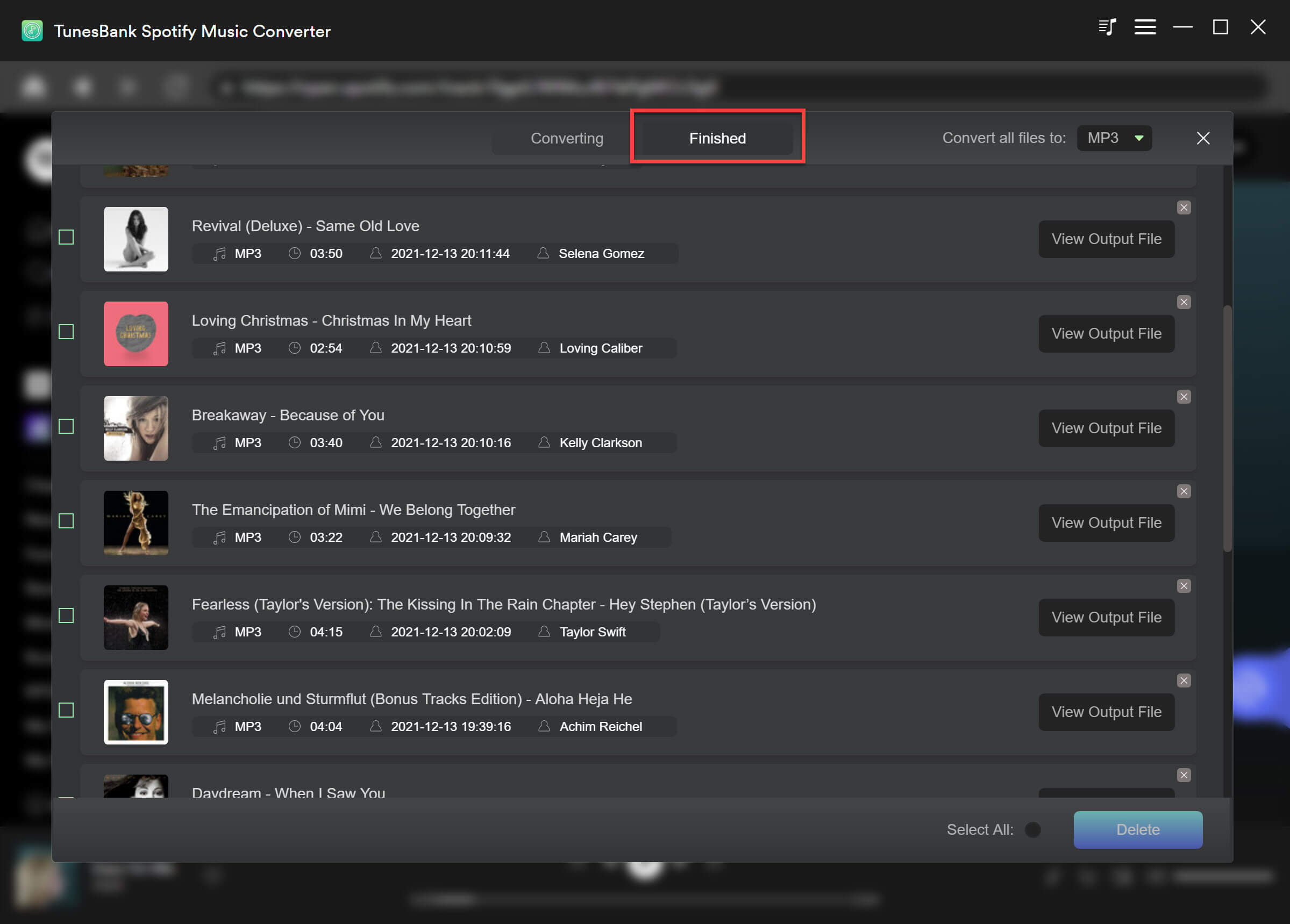 Step 6. Play Spotify Music on Xbox One/Xbox 360
Now insert the USB flash drive into your computer, and then copy and paste the converted Spotify music files to it. When finished, you can insert the USB drive into Xbox 360 or Xbox One for playback.

Tips: To play Spotify music on Xbox 360 or Xbox one, you can install Simple Background Music Player or VLC Media Player on your Xbox.

In this way, you can freely play Spotify music and playlists on Xbox One and Xbox 360 anytime, anywhere, without Spotify app, without Spotify premium subscription account, without smooth network! By the way, you can also move the converted Spotify songs to your portable devices, such as PSP, PS4, PS3, Zune, MP3 player, iPod nano, iPhone, Android, etc.

Convert Apple Music to MP3, AAC, WAV, FLAC, etc at amazing speed with 100% lossless quality so that you can play Apple Music on any device and keep Apple Music forever.